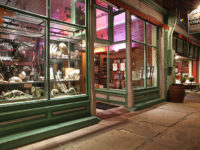 While ArtWalk isn’t officially happening in Jerome because of the pandemic, the artists of Jerome have been busy making new work and many are open for business. For more information visit www.jeromeartwalk.com.

Artist and biologist Joey Williams is a bone collector. He uses his biology background to acquire, prepare and preserve collectable specimens. “It’s often dirty, messy work,” he says, which he feels “overlaps with his darker, macabre, style of art background.” He enjoys his particular mash-up of science and art.

His specimen collection is morphing into a collection that could eventually populate a museum, he told me. “I have over 700 mammal species in my personal collection -everything from bats and mice, to elephant, rhino, camel and hippo bones.” He has a full giraffe skeleton.

“Generally, I don’t sell the stuff in my collection. Those specimens are slated for my eventual museum. Those that I do sell come from a variety of sources: I collect from natural deaths at farms, ranches and zoos, as well as from roadkill. There are suppliers that will sell bones,” he said, “but I know that some of those animals were killed just for their parts, and I want to stay away from that. What they do is considered legal, but I prefer to scavenge. Nothing dies just so I can make money.”

When I asked about his philosophy in this endeavor, he thought for a moment and then replied: “Respect and appreciation of nature, without desecrating it. Some may say that I am doing just that with the animal bones I collect, but I feel like I’m giving them an extended life – an extended appreciation – sometimes through the use of art, and sometimes through displays like this one.”

In fact, the window installation is an effort to ‘test the waters’. He would like to eventually open his museum in Jerome – a ‘Skullatorium” – and populate it with his ever evolving collection, just a small sampling of which can best be viewed from the street as dusk settles in, at Caduceus Cellars on Main St. in Jerome.

Relative newcomers to the Jerome Art Scene Christie Helm (Chicago) and Damian Gomes (Phoenix) met when they moved into art studios next door to one another at the Jerome Art Center. They are both showing new paintings and sculptures at a Pop Up Gallery for a limited time only. Open Fridays-Sundays, October 30-November 29, from 12-5. On Saturday, November 7 there will be live music and tarot readings throughout the day. For more information email christiehelm@sbcglobal.net

The Pop Up Gallery will be at 240 Hull Ave (Across from Bobby D BBQ).

Cody has been busy painting away, both indoors and out. Stop by the Studio to see some new works. You can also see his work at www.CodyDeLong.com, where he has new prints and lower pricing for the next two months, so now is the time to get that Cody print you’ve been wanting. Cody DeLong Studio – 300 Hull ave. Between spook hall and the visitors center.